WHAT WEΓÇÖRE WATCHING THIS WEEK: Muppets, CSI:Cyber & The Trial of O.J. Simpson!

Here’s the shows we must-see this week, and you should too!

MONDAY, Feb. 1
Crazy Ex-Girlfriend (8 p.m., The CW) It’s back to camp time as Rebecca returns to the summer camp where she first fell in love in love with Josh, awww! Don’t forget the marshmellows!

The Daily Show With Trevor Noah (11 p.m., Comedy Central) The Daily Show host has Reshma Saujani, founder and CEO of Girls Who Code, as a guest. We love fellow DivaGals who give good tech!

TUESDAY, Feb. 2
The Muppets (8:30 p.m., ABC) Winter hiatus is over and The Muppets are back on the job! The Mindy Project‘s Utkarsh Ambudkar guests as a late night fixer to try and make “Up Late” better (as if!).

Fit to Fat To Fit (10 p.m., A&E) New York City trainer Adonis packs on 70 lbs. with NYC’s most famed treats, to lose it all with his client Alissa. Adonis became a trainer to fight depression in his teens.

WEDNESDAY, Feb. 3
Madoff (8 p.m., ABC) He doesn’t quite make our White Boys We Dig list, but we’re intrigued to find out how Bernie Madoff swindled millions with his ponzi scheme. Richard Dreyfuss stars in the two-night mini-series.

DISH! Tyga Moves On! Saved By The Bell’s Lark Voorhies Files For Divorce After Sex Tape!

Hot Beauty From Around The World 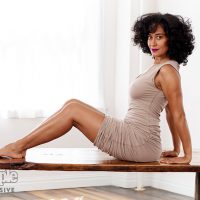