Justin Bieber and Selena Gomez’s serene and pastoral holiday in Canada came to a screeching halt. The paparazzi showed up, the police were called and Bieber was arrested. Maybe posting pictures on twitter and instagram of your “secret” quiet holiday in Canada is not a good idea? Just a thought …

Cee Lo Green deleted his twitter account after posting some disturbing comments about rape, ecstasy and presumed content. Sidebar to self: Does Cee Lo Green have a daughter or a sister? I wonder if he was listening to Robin Thicke’s “Blurred lines” when he tweeted …

Meanwhile Chris Brown is back in court in D.C. On a better note the meter on his on-again off-again girlfriend, Karrueche Tran is back on and ticking. I give it a month?

Brad and Angie finally made it legal. We are loving the wedding dress! 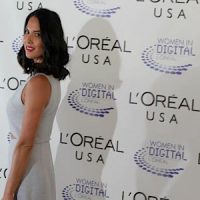 DISHING DIVA! The Gossip Table: Miley To Shock Nation With Half Naked Performance — Censors Are Ready!! Plus: JLo Disses Boytoy & X-Files Couple Off-Screen As Well? (The Truth is Out There!)